Johnny is officially walking. He took his first step on July 9th and we would say he started officially walking at the beginning of August. He crawled for a while and was able to squat and stand up unassisted for a couple of months so he is a pretty good walker for only having 3 weeks of experience. His favorite thing to do now is walk in a circle as fast as he can until he is dizzy and then sit down. He giggles the whole time he is doing it. Still have yet to get it on video but will; the video camera is charged up and ready for his next "spinning" moment.
He hasn't said any words yet but is using a few signs like "more" and "finished". I think he is starting to say mama when he is upset but won't officially say that till I know for sure :). He understand so much of what we tell him like "sit down" or "up" or "bathtime" or "doggy". He is doing well with "hands off" as well and we haven't really had to kid proof anymore than we did with Emma.
He is sleeping through the night and taking two naps, an hour in the morning and an hour and a half in the afternoon. We just stopped swaddling him but still give him a bottle and rock him before putting him down in his crib.
He is still a bit behind on getting teeth as his third tooth (first on top) has just broken the surface.
He had his last bottle of formula before going to sleep last night. We are happy to be rid of the formula tub sitting by our sink. We are still giving him bottles before nap time and bed of warm milk and plan to do this till he is 18 months old. He loves his bottles and they are a great way for us to make sure we cuddle and rock with him for at least a couple of minutes each day.
He still loves for us to play with him and if I sit on the ground while he is playing, every ten minutes or so he moves his way over to sit in my lap. He is definitely a people person and not a play by himself kind of kid...at least for now.
His hair.....is still as awesome as ever. People ask us all the time when we are going to cut it. Maybe never? We love it! It is very easy to manage and just keeps growing and growing. We are looking for a good place to go to get it trimmed but really can't imagine him without his curly hair. Here is a photo of him at the beach with his hair in all its glory...... 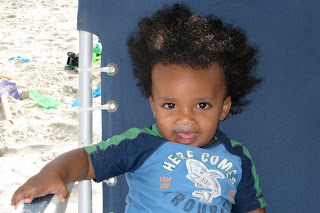 Posted by John and Sarah Pell at 7:31 AM

Loved meeting Mr. Pell and the kids at Costco last week.....Oh how exciting to meet a family that I read their blog....Thanks for sharing....Hello Kitty was so cute in Emma's hand....Made her smile to hear that I love Hello Kitty, too...
Love ya,
Sandy in High Point

Good job walking, Johnny!!! His hair is just great!! Love it!! What did you end up finding that works the best for it??

Love seeing pics of both your little cuties! It seems like a lifetime ago we were in Ethiopia together meeting our children for the first time!!! Crazy!