I took these photos during out layover in Chicago. The kids were AMAZING during the way to Washington somewhat thanks to all of our technology but mostly because they are just great kids. We left our house at 4 AM and both kids were awake and in great spirits. Johnny slept for the first flight and Emma watched a movie and was just soooo excited to be flying. We had to gate check our big carryon bags and when we arrived in Chicago one of them did not come off the plane. They told us it just wasn't there. What?!?!?! You can actually loose a carryon? So we spent an hour of our 3 hour layover arguing with various people at the airport trying to figure out where our carryon went to no avail. It had ALL of the kids clothes in it. We finally gave up and sat down to wait for our next flight to find out it had been cancelled and we were on standby for a flight two hours later. We were one of the last to board this second flight and didn't get seats together. I had to assert my mother bear instincts and stare down some selfish adults insisting that someone move so I could sit next to my 3 year old daughter who WAS NOT going to sit by herself. Phew...got a seat next to Emma with John sitting in the row in front of us and the kids fell asleep for the entire flight to Seattle. We were greeted by Meemaw and Papa at the airport and were so excited for that part of our trip to be over. 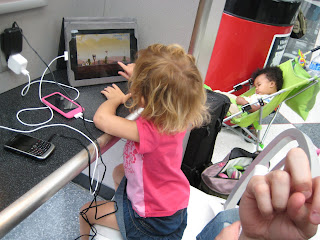 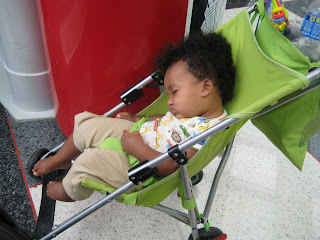 Posted by John and Sarah Pell at 7:25 AM

I cannot believe the nerve of some adults who do not see the problem with a three year old having to sit by herself!! People, come on!! Way to be assertive, mama.

As bad as this is, imagine your flight problems in Ethiopia, and this will all seem okay. :) Your cutie's seem to be getting even cuter...is that possible?

I'm in shock of adults thinking a 3 year old sitting by herself would be fine. And what I'm more in shock of is why would they want to sit next to a 3 year old that's not there own? They must have been insane.

What happened to your luggage?